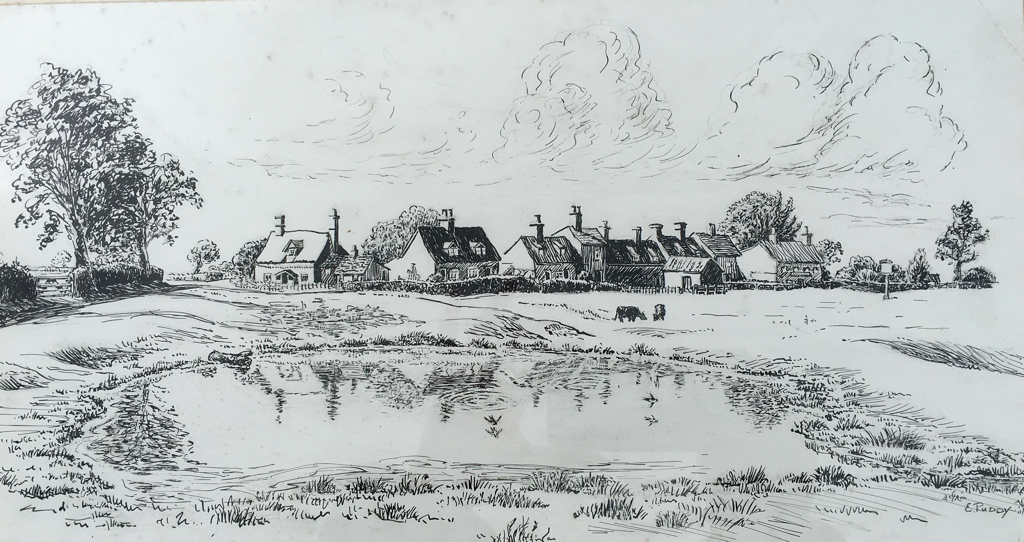 A PICTURE OF ETLING GREEN

Etling Green has kept the most clearly identifiable ‘village green’.  As Dereham town huddles to the west of the parish boundary, Etling Green is some three miles from the centre.

In order that the farms in the area could be serviced, certain satellite communities had grown up, with Dillington, Northall Green, Etling Green, Dumpling Green and Toftwood being the main ones.

In the 1851 census there are 46 families listed, 2450 people living there.  Almost all were employed in agriculture.  Nine farms were listed:

The remainder were under 100 acres:

The cottagers were agricultural labourers. There were two innkeepers, Robert Catchpole at the Bell, and Widow Woodcock at the Red Lion. Robert Dann was the tollgate keeper and Barney Stonock the blacksmith. There were also two shoemakers, and carpenter, and a Chelsea Pensioner.

Some remarkably large families lived in the small cottages, a few of which survive. Henry and Sarah Mann had 7 children, and a grandson living with them. Henry and Mary Ward also had seven children. Edward and Maria Crocker only had four children, but took in three lodgers. James Barker, one of the shoemakers, topped the lot:  he had eight children and a 72-year-old lodger. Some of the children as old as 12 or 13 were described as ‘scholars’. Hannah Leggett, daughter of the other shoemaker, was listed as a scholar at 15, but many of the children were out at work long before this age. Henry Draper’s 11-year-old daughter was a house servant, his 10-year- old boy a farmer’s boy. The youngest working child was George Mann, aged nine, weekboy.

Reverend Armstrong
From his diary we find  “Completed a visitation to certain outlying parts of the parish.  Thirteen are Dissenters, but only four families are without Bibles, and only 14 children unbaptized.  Only fifteen people have received Holy Communion.  The people are cleanly, frugal and glad to see me”.

October 5th 1855
“To Etling Green School, found 50 chubby little children. Examined them in the Catechism and found them improving”

The old Etling Green School building is still standing, and is a private house. It was, however, not built at the time of Reverend Armstrong’s visit. The census entry for Harris Martin offers a clue. He was an agricultural labourer, aged 42, but his wife, Maria, 35, is described as a school mistress, and his two daughters as ‘scholars at home’. The description of ‘scholars at home’ is also used for the children of the Reverend Joseph Thompson of Guildhall School in Dereham. Possibly Maria ran the Etling Green school from her home. The Annual Church Report shows that both Etling Green School and Dereham Infant School were supported by the funds of the National School. In 1864 an entry shows an item of £5 for the rent of Etling Green School. The rent was reduced in 1872 by ten shillings.

Between the National Schools in Dereham area there were 363 children.  The Church Report states “these children receive a really good education suitable for their position in life, at one penny per week and without any extra charges.  Whilst the Etling Green branch school was shown with Mrs Martin in 1871, by 1875 there were new arrangements and the children were in the new school building, provided at a cost of £600.

On leaving school most of the young men lived at home and found work on the land. So did some unmarried girls, but land work was not an ideal occupation for a woman. In 1864 Reverend Armstrong recorded that he visited a young woman who was dying, at Etling Green, ‘a victim of field work’. Luckier girls became house servants or dressmakers.

The blacksmith at Etling Green had a 19-year-old apprentice, and the carpenter had his 31-year-old son working for him. A taylor aged 61 lodged with Sarah Woodcock.

A puzzling entry in Reverend Armstrong’s diary notes in 1855 that he conducted a Lent service at Etling Green, and yet the little chapel was not built until 1882.

Reverend Armstrong also noted that several people who lived in remote parts of the parish came to church in Dereham in their ‘dickie’ [donkey]carts.

The Church Reports also reveal the existence of Parish Visitors. These people must have done much good work in the days before social workers.  The visitor for Etling Green in 1864 was Miss Moore, who also covered Badley Moor.

The St Withburga church on Norwich Road was built in 1879. The 1892 directory shows only Toftwood Mission Church, evidently services at Etling Green were discontinued when St Withburga opened. The Dissenters however still held their services in a borrowed room, before the Lecture Room was erected in 1882.

The Eastern Daily Press of 28th June 1882 described the beginning of this project:

“On Wednesday afternoon the foundation stone of a new Lecture Room to be erected in the hamlet of Etling Green was laid by Mrs A Ruston in the presence of a large number of spectators.  For many years the only place of worship used by Dissenters worshipping at the hamlet was a room kindly lent by one of the residents.  Amore commodious and convenient building being desirable they decided  with the help of a few other friends to erect a Lecture Room on a piece of ground given by Mr Isaac Comer.  This place will be quire unsectarian and the services are to be conducted by ministers and laymen from the various chapels in town.  A public tea was provided in Mr Ruston’s barn, he trays for which were given by friends.  The barn was decorated with flags, flowers and evergreens and was made very comfortable.

A public meeting was held afterwards at which Mr C W Alexander presided.  Addresses were delivered by the Revs. W Fox,  Giles, and A Mills, and Messrs Scales, Pilch I Comer, W Comer, Dye, Critoph and Holman.  There was a large attendance and at the close collections were made on behalf of the building land.”

Things were looking up in this little hamlet which had never before possessed a public building. There was even a grocer’s shop listed in the 1883 directory, owned by Samuel Bloy, who also had a flour, corn, coal and pork butchers business on the Swaffham Road in Dereham. It must have been a boon to local people not to have to carry their shopping from the town.

Some degree of farm mechanisation began to reduce jobs, and improved transport made migration easier and the lure of the town, with its increasing prosperity, was strong. The Norton family illustrate this.

In the 1881 census, George Norton and his wife Charlotte have five sons.  All these sons moved away, two to London, one possibly to Canada, and one to Rotherhithe docks.

When the bicycle became available the town was brought closer. The bicycle was, to the working man, what the ‘dickie’ was to the better off.  The hamlet slowly declined, and after World War I Etling Green dwindled into a small dormitory area for Dereham. 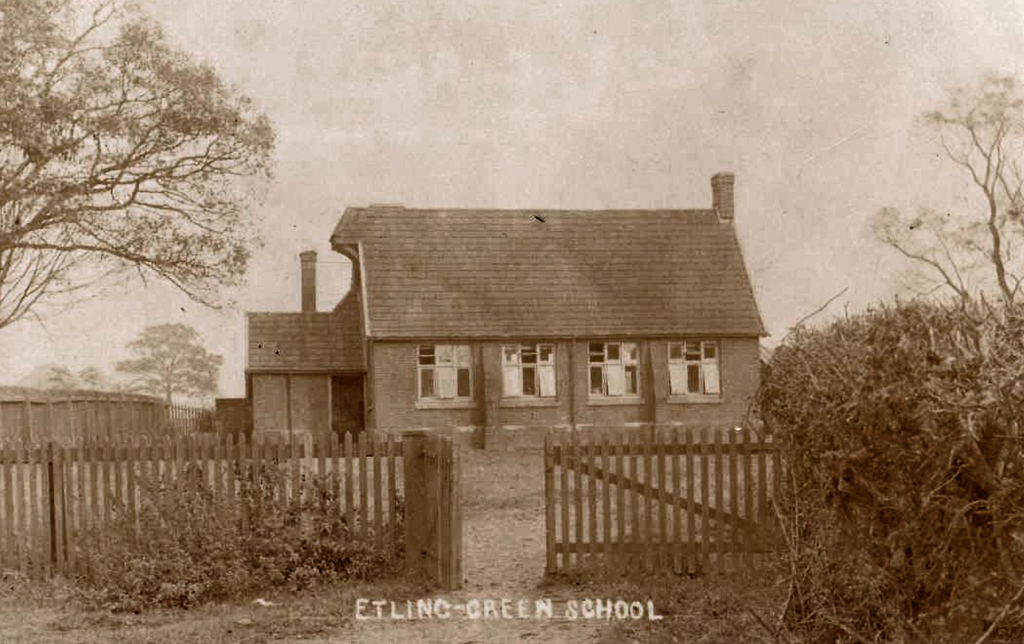