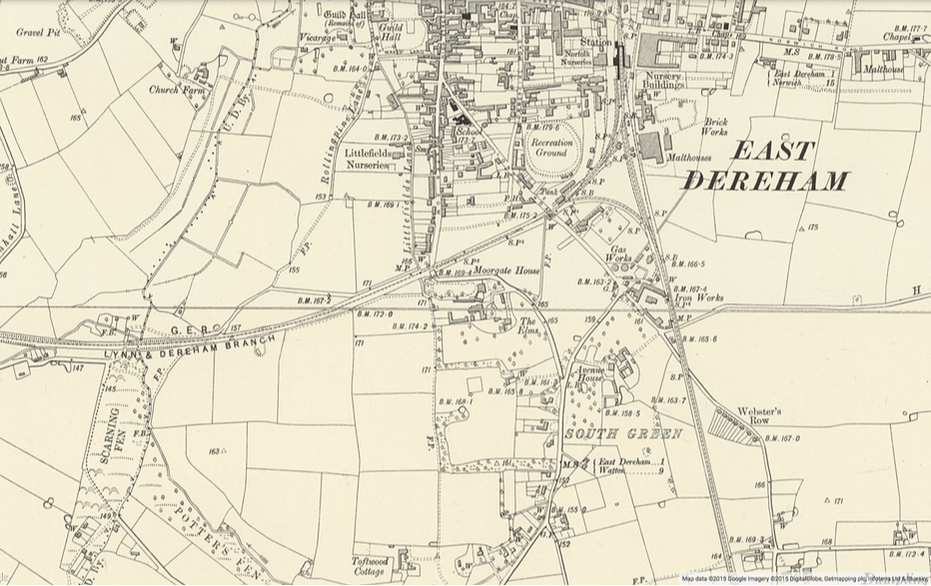 The railway reached Dereham in 1846. An 11.5 mile single line branch of the Norfolk Railway was built by Messrs Grissell and Peto, and officially opened in February 1847.  The Norfolk Chronicle of 20th February gives a delightful account of the day’s festivities, the highlight of which was a dinner for 80 gentlemen, at the King’s Arms.

“elsewhere several convivial parties met at the different inns in the town to express their delight and satisfaction with the Dereham-Wymondham line”.

At last Dereham was linked to the nation’s commercial arteries.

In the course of time other lines appeared. The last part of the King’s Lynn-Dereham railway, the section from Sporle to Dereham, was completed in 1848, with a separate terminus at Lynn Hill, which later disappeared. The line to Fakenham was to open a year later, and that from Fakenham to Wells in 1855. Somewhat tardily the ‘round the world’ line from Norwich to Dereham, via Aylsham and Reepham was completed by the Great Eastern Railway in 1882, making Dereham a junction of some importance.  The way ahead lay open for expansion and prosperity, and a share in the industrial growth of the later 19th century.

In 1848 the somewhat disreputable Eastern Counties Railway had taken over the Norfolk Railway, dismissing the staff, and replacing them with ECR men. It, in turn, was taken over by the progressive and enterprising Great Eastern Railway in 1862. From then on the full potential of rail transport in the area was developed.

The effects of the railway on the town must have been considerable.

A paragraph from the ‘Regional History of the Railways of Great Britain’ states:

“With an 1841 population of 3,837, Dereham already had several brewers and malsters, two iron foundries and various small industries geared to the needs and produce of what was described as the ‘Garden of Norfolk’.  But by 1855 it had grown to nearly 4,500 and had added a steam saw-mill, two further foundries, and a greatly expanded interest in the making of agricultural implements.  IN that year White recorded how the town trade had ‘considerably increased’ since the opening of the railways, and described the extensive granaries which had been built near the station and through which extremely large quantities of corn were despatched by rail.  East Dereham in fact well illustrated the power of the nineteenth century railways to develop a small town when not too near a major centre and when conditions, in this instance the high fertility of the local soil, were right”.

In 1850 the Reverend B J Armstrong came to Dereham to begin his long and faithful ministry to the town. He kept a diary and from its pages we can glean much of what the railways meant to a well-to-do person. His comments are remarkably matter of fact.

“I took the train from London to Norwich, and only objects of interest on the way being Cambridge in the distance, Ely Cathedral and the breezy commons and plentiful game of Norfolk”.

On June 4th 1855 he records that he took his choristers out to Lowestoft for the day:

“We started at 6.13 in a third-class carriage and enjoyed a brilliant day at the sea.  Only three of the little fellows had ever seen the sea before, their exclamations of delight were loud and frequent”

The cheapest fare was 1d per mile.

Along with the railways came the electric telegraph. The Norfolk Railway was a pioneer in the use of this instrument in railway operating and its spare capacity was made available to the public. It provided a nationwide accurate time check, replacing the often erratic local time with ‘Railway Time’.  It gave the latest Stock Exchange prices and racing results in advance of the arrival of the newspapers, and Reverend Armstrong tells us how in 1861, when the Prince of Wales was suffering from gastric fever, a prayer written at a meeting of the Privy Council at 2.00 p.m. was received in Dereham at 9.30 p.m. 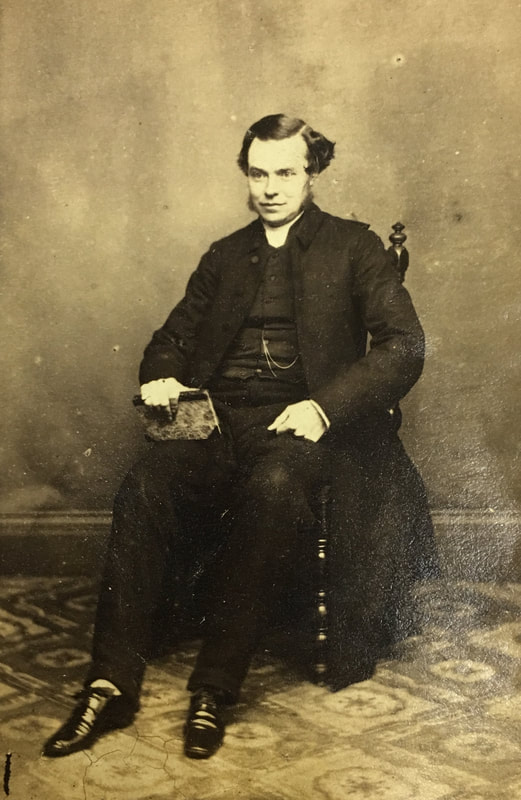 Reverend B J Armstrong
The information in this section is taken from a document written by members of Dereham WEA and the University of Cambridge Board of Extra-Mural Studies led by Chris Barringer in 1989, and given to the Dereham Archive in 1998.
The original authors were: Joan Adams, Chris Barringer, Ben Norton, Teddy O' Donnell, Brian and Ruth Warwick-Smith, with help and additional material from Colin and Anne Chambers, Joy Lodey, Sharon Lake and Beryl Flatt.
The text was prepared for this website by Steffi Spooner.