The information in this section is taken from a document written by members of Dereham WEA and the University of Cambridge Board of Extra-Mural Studies led by Chris Barringer in 1989, and given to the Dereham Archive in 1998.
The original authors were: Joan Adams, Chris Barringer, Ben Norton, Teddy O' Donnell, Brian and Ruth Warwick-Smith, with help and additional material from Colin and Anne Chambers, Joy Lodey, Sharon Lake and Beryl Flatt. 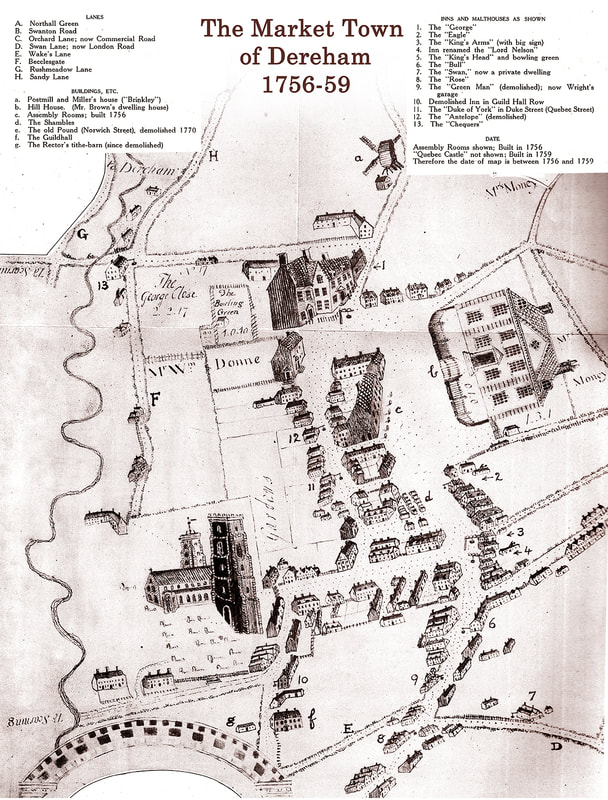 Dereham can claim with some justification to be at the centre of Norfolk.  It has the disadvantage of neither sea nor navigable river to help it. It does however lie at an almost inevitable crossing point of West to East, and South to North routes across Norfolk. This position must have been one of the reasons for its very early importance, and long before the Norman Conquest the Abbots of Ely, and later the Bishops of Ely, were its Lords.

The ancient parish of Dereham stretches for about four miles to the West and East, and about three miles from South to North.  The town occupies a small part of the total area of 5,222 acres, and lies on its western edge, overlooking the shallow valley of the river Blackwater, which flows north to join the Wensum.

There are several subsidiary hamlets within this ancient parish: Etling Green, Northall Green, Badley Moor and Dillington being the main ones.   Northall Green, South Green and Badley Moor were commons until 1812, and the Neatherd, Etling Green and Rushmeadow survived as commons even after the Enclosure Act of 1812. Toftwood, a royal wood, had only just been cleared by 1800.

At the beginning of the nineteenth century Badley Moor still remained part of a much larger stretch of wild, wet wasteland which extended well into Mattishall, Yaxham and North Tuddenham.

In 1775 Parson Woodforde went to look at the remains of a murderer hanging on Badley Moor in a gibbet.

Wide stretches of farmland, remnants of the mediaeval open fields, remained to the north east and south east of the town.

The Saxon units of government, the Hundreds, were Mitford and Launditch, and these names still survive today. Ely is recorded as owning the Hundred of Mitford, and Dereham has always been the largest place in this Hundred. To the north west of Mitford lay the Launditch Hundred, named from the Saxon earthwork that runs from North to South through it.

In 1777 the two Hundreds formed a Union for the purpose of more efficiently looking after their poor, and built the House of Industry at Gressenhall in order to make the able-bodied poor earn some part of the cost of their maintenance.  This Union continued to look after the poor until the twentieth century, but a Board of Health was set up in 1860s from which Dereham was finally declared to be a separate Urban District in 1888. This Urban District remained until 1974. As the largest settlement in the two Hundreds, and as the town where the Petty Sessions were held in front of the local Justices of the Peace, it was the centre of activities for the two ancient Hundreds. Many social activities also took place in Dereham.

Methods of farming changed dramatically in the nineteenth century as field drainage was improved, and steam engines were used for threshing and ploughing. The town itself has probably changed little in layout, although fires in 1581 and 1679 destroyed many of the buildings that had existed. In 1815 the Enclosures Map shows the Market Place, Norwich Road and Baxter Row, with brief extensions along the Swaffham Road and Swanton Morley Road. 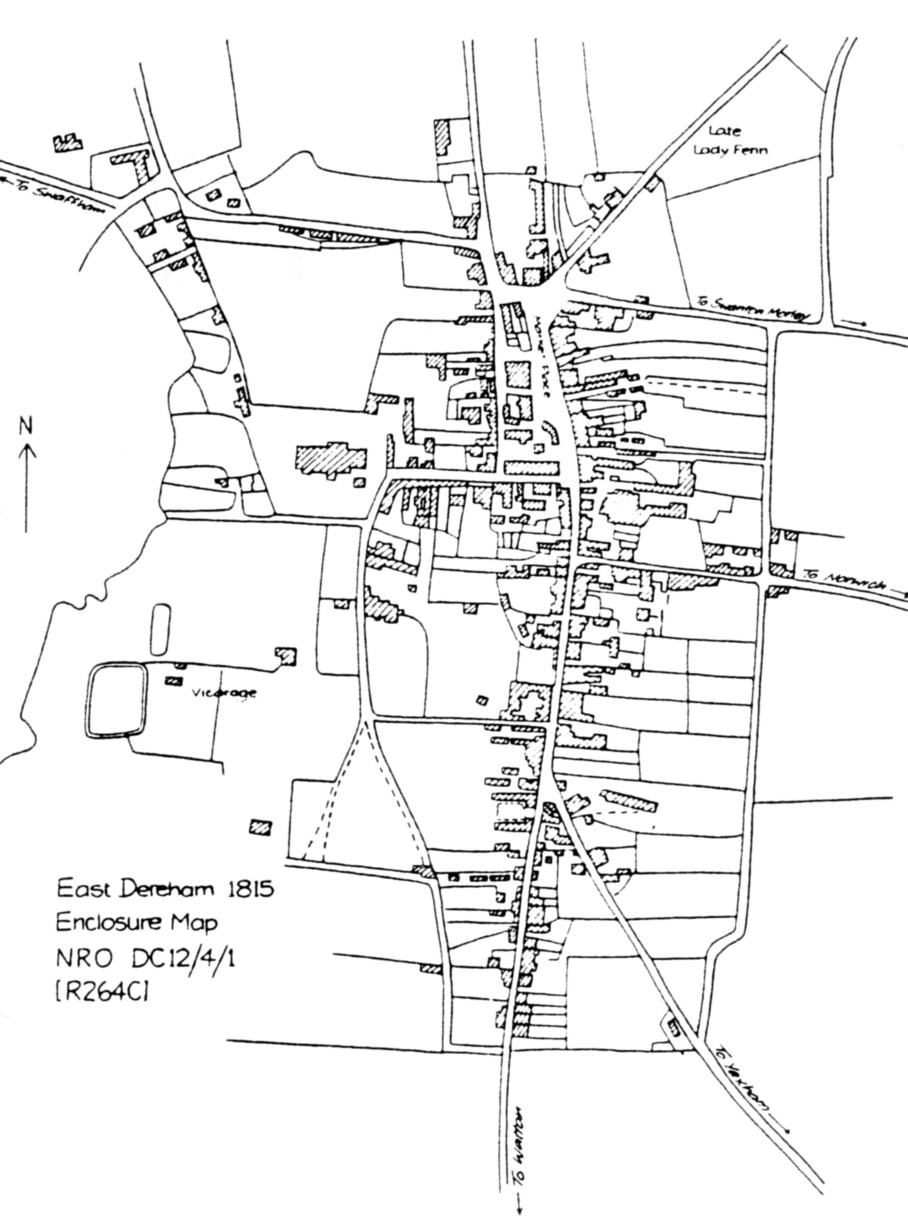 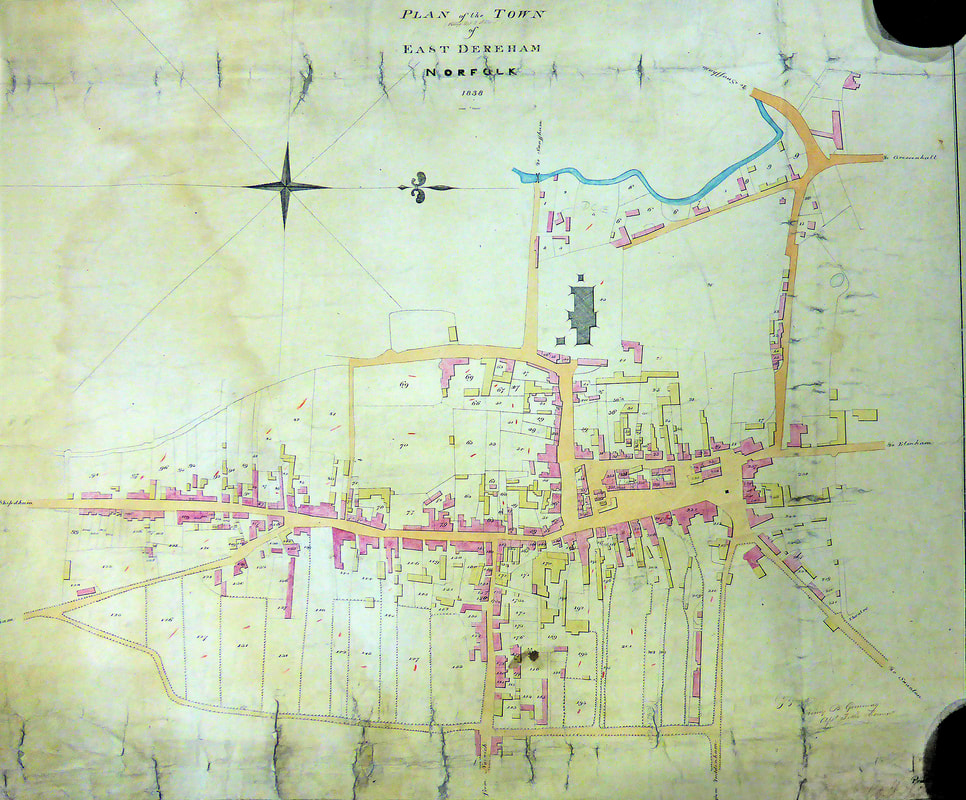