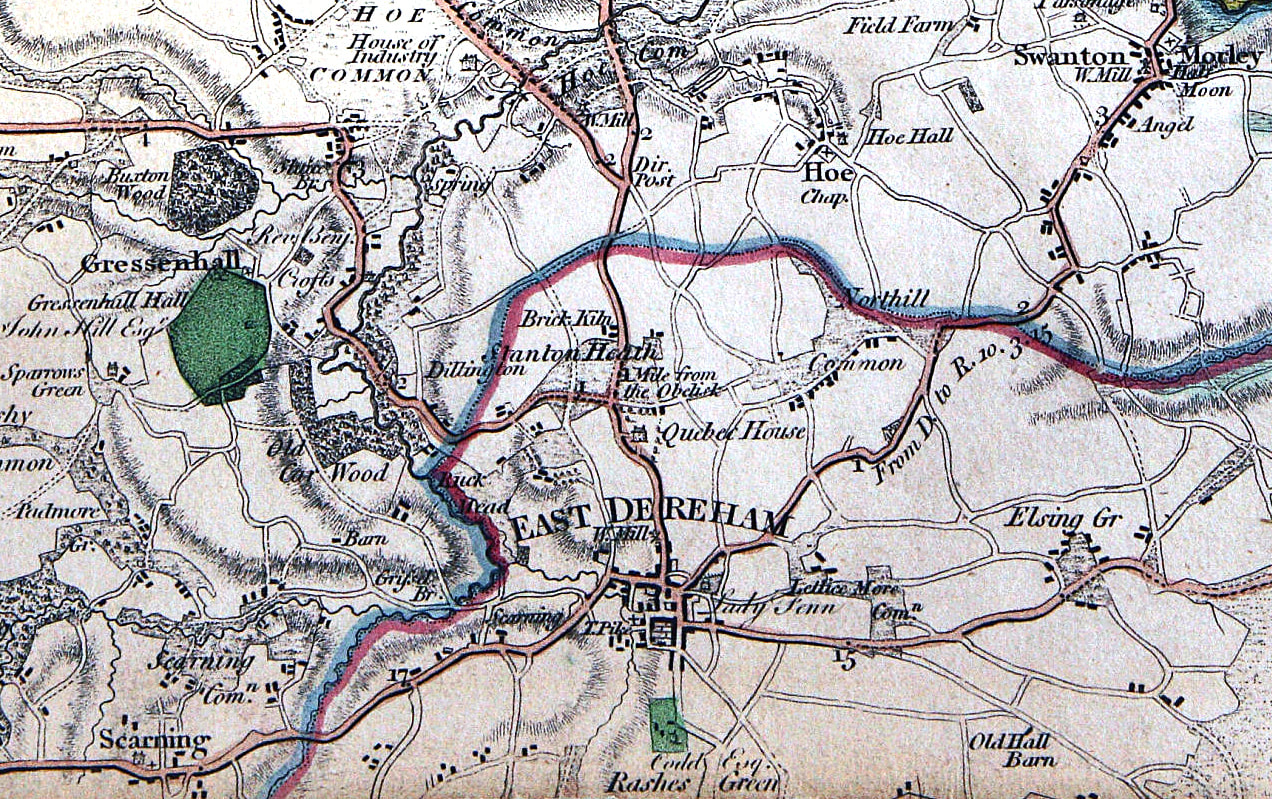 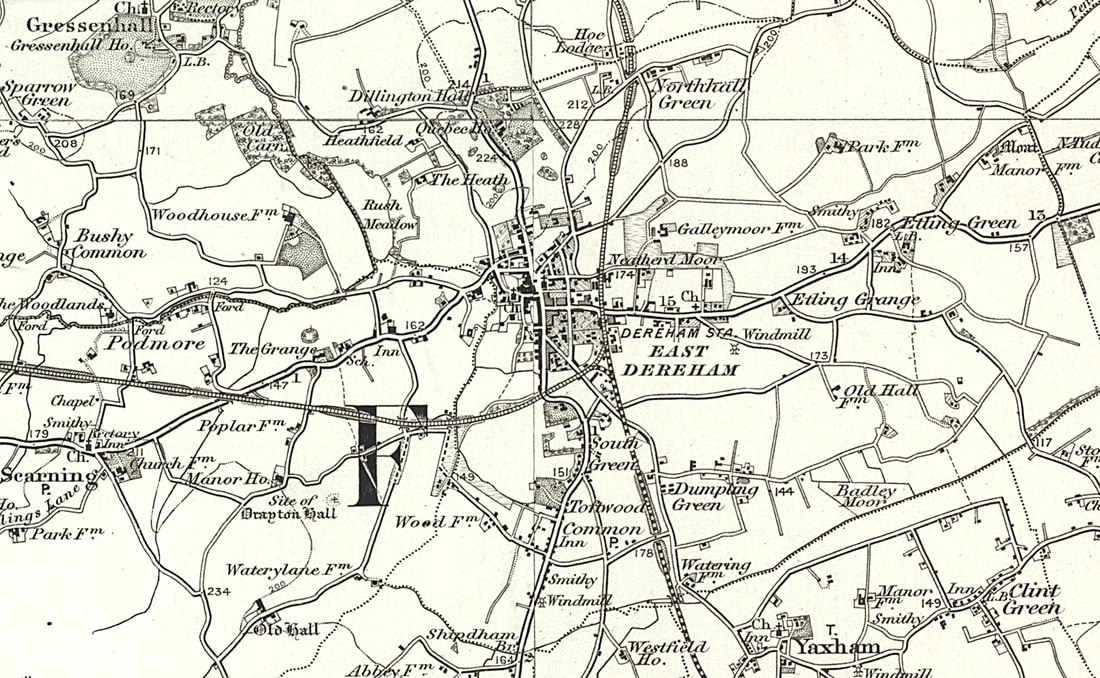 A mediaeval town was fortunate if it stood on the banks of a navigable river, which provided a readymade means of transport that required little maintenance. Dereham has no such river and, in the first half of the nineteenth century, as in earlier times, was entirely dependent upon roads. Situated in the middle of a flat, relatively dry, county, this caused fewer problems than in other areas.  King Charles II’s famous remark come to mind, ‘Norfolk ought to be cut out in strips to make roads for the rest of the Kingdom”

Perhaps it was sandy Breckland he would have liked to cut up, to alleviate the problems in clay areas in the winter, when after rain roads were described as being ‘deep and floundrous’.

In mediaeval times, when traffic consisted of pack horse and pedestrians, road maintenance was satisfactorily dealt with under the Manorial System. With the decline of this system and the steady increase in wheeled traffic, a better system of maintenance was needed. In 1555 an Act was passed making each Parish responsible for roads passing through it. This was never popular. William Marshall wrote in his Rural Economy of Norfolk 1804: “When roads are worn by the public at large tenfold more, in some instances, than by the inhabitants of the parishes they happen to pass through, it becomes unreasonable, if not unjust, to impose the task of repairing them on the individuals who happen to be possessed of a plough-team, cart, wheelbarrow, shove or basket, though they may never use the road they are doomed to repair.

To mitigate this injustice the turnpike system was evolved.  Trusts were set up and appointed with powers to levy tolls from road users to be used for financing repairs. This required an Act of Parliament which, in respect of the Norwich-Swaffham turnpike, was passed in 1770.

Tollgates were set up at Etling Green, to the east of the town, and near the old gravel pit in Scarning to the west. There is an excellent chapter on the working of this system in Boston and Purdy’s “History of Dereham” and the following items augment their account.

Pikekeepers were initially appointed by the Trustees to collect the tolls, but human nature being what it is, before long some of the money was finding its way into the pikekeepers’ pockets. This led to the practice of ‘Letting the Gate’ or ‘Farming the Tolls’ for a fixed sum over a certain period, usually one or three years. This was regularised in an Act of 1773.  The Etling Gate was let in 1781 for £137 and the Scarning Gate for £166.

In November 1832 out of the ten Turnpike Trustees listed, no less than seven were reverend gentlemen. Why the clergy should be so attracted to this duty is a mystery.

A few glimpses of the Turnpike System can be gleaned from newspapers of the time.  The following notice appears in the Norfolk Chronicle on August 27th, 1803.

Any person willing to undertake the paving of the Turnpike Road leading through the Market Place is desired to deliver such proposals to Mr John Roper Surveyor”.

[A surveyor in those days was not the professionally qualified person we know today. James Macadam giving evidence to a Parliamentary Commission in 1819 gave a list of those who had preceded him in the six trusts to which he was then the General Surveyor. They included four old men, one of whom had been bedridden, two carpenters, two publicans, a baker, a coal merchant and a former Lloyds Coffee House underwriter].

In 1807 the Norfolk Chronicle contained the following notice:

The next meeting of the Trustees will be held at the King’s Arms, Dereham, on Friday 3rd April at 11 o’clock in the forenoon.  By order of the Trustees, De Hague and Stone.

This was a statutory notice.

Other activities were also reported

“May 2nd 1800 – About 9. o’clock in the evening, as Mr Charles Gilman was riding on the Turnpike Road leading from Norwich to Dereham, he was violently assaulted by two men, armed with bludgeons, who struck him and pulled him from his mare and, after they had rifled his pockets, and taken between £10 and £11, they both mounted his mare and rode off toward Norwich”.

Turnpike Trustees in some cases provided milestones. The massive and uniform stones along the old A47 from Norwich to Swaffham come from this source, but only two remain in the Parish of Dereham, and these, and the tollgate cottage at Etling Green, are the only visual reminders of the Turnpike.

The Tollage at Etling Green has windows at either side, giving views of the road in both directions.  There is a gravestone in Dereham churchyard in memory of John Clarke, died 1827 aged 56, ‘many years the keeper of the Scarning Toll’.

Though the Scarning Gate stood less than a quarter mile, as the crow flies, from Dereham Parish Church, such are the peculiarities of the parish boundaries, that it actually was in Scarning. It stood near the bottom of Swaffham Hill. Did it, possibly, display a notice such as that at the Stratford Bridge Toll, still there in 1900, which read:

Dumb beasts pray use with all good will

Goad not, scourge not with thonged whips,

Let one curse escape your lips,

This was one of a number of similar tablets erected throughout the country in the early part of the nineteenth century, when the first glimmerings of humane treatment of animals began to show themselves.

Even under the Turnpike System the roads appear to have been inadequate to meet the growing transport needs. A short item in Mackie’s Norfolk Annals tells of a meeting held in the Assembly Rooms on May 21st 1819, “to consider the best means of obtaining a navigation between Dereham and Norwich.”  It gives no details but a long letter from Mr A Farmer, printed in this Chronicle on 26th June 1819, throws more light onto this.

The town of East Dereham and its vicinity are confessedly the worst situated in any part of the County of Norfolk for the delivery of corn, and particularly of Barley, lying in the centre whichsoever way you direct your attention on the map, a distance of 16 – 24 miles presents itself to any station to which corn can be shipped in any kind of vessels.  The carriage of coals is an object of equal importance as from the daily decrease of wood, they are the only fuel that can now be used.  The additional expense of £1 per chaldron for land carriage presses hard upon the traders, labourers and in fact every rank of people.  Timber, deals, ironware, grocery and all other heavy articles equally labour under this oppressive weight of land carriage.”

The latter also reveals that a proposed canal was to follow the course of the River Wensum. The scheme came to nothing.

Coal was undoubtedly one of the major commodities conveyed over the Norfolk roads. We read of coals being offered for sale at Wells in 1807:

In 1833 details were given in the Norfolk Chronicle of an inquest held on a man killed when proceeding from Blakeney to Mileham with a load of coal. It appears he had found it necessary to stop at frequent intervals to wash the coal dust from his throat, and at Holly Hill, on the Holt-Dereham road, he fell under the cart wheels.

Coal also reached Dereham via King’s Lynn, by the River Nar to Narborough and then on by road, almost doubling the price by the time it reached Dereham. At King’s Lynn it could be bought for 16/- to 19/- per ton, and at Swaffham 27/-, but at Dereham it sold for 28/- to 30/-.

Around 1820 the country’s roads began to benefit from the pioneering work done by the two eminent civil engineers Telford and Macadam, who introduced improved methods of construction and maintenance.  They were consulted by Turnpike Trustees up and down the country and the resultant improvement in the roads enabled mail and stagecoach services to be speeded up.

George Borrow managed to make the journey more cheaply, he walked from Norwich to London, and although it took him twice as long his expenditure on food was just 5d.

Further improvements were still needed and it was not long before what Sir James Macadam called ‘the calamity of the railways’ began to seep the country. 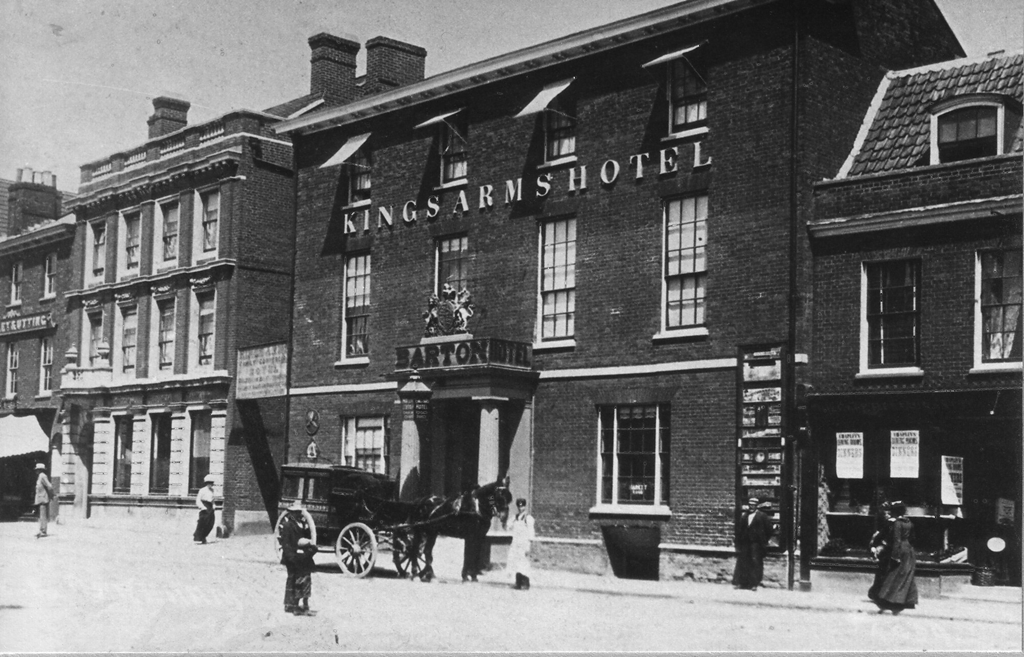 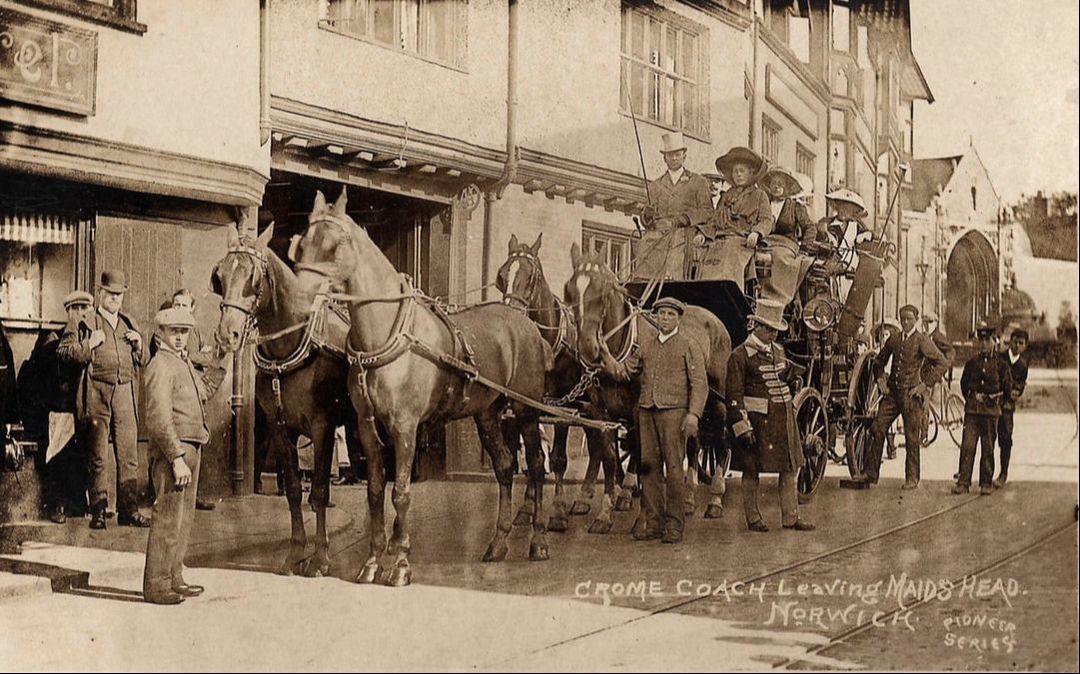